AthTek NetWalk is a comprehensive network infrastructure analysis tool which helps in managing, maintaining and troubleshooting all kinds of networks. It is particularly useful for new network administrators who wish to gain in depth knowledge about network infrastructure and management. AthTek NetWalk contains graphical representations of the network with the use of advanced packet sniffing, to help project the network state in statistical and graphical format. AthTek NetWalk can be used as network intrusion detection system (NIDS). It allows users to set up the alerts to trigger events such as sending an email or message, running programs, etc. If there were doubtful network communication on your network, simply set up a filter in event manage to identify it, even to block it from accessing. AthTek NetWalk can also be used as an education tool for novice to learn network monitoring and packet sniffing knowledge. If you intend to be expert in network monitoring or packet sniffing, you will love this comprehensive networking tool! AthTek NetWalk is expert in packet sniffing. It works together with Wireshark and WinPcap, and has achieved better performance in packet sniffing and network analysis. AthTek NetWalk supports almost all protocols, including those unnamed ones. It also perfectly support IPv6, which only a few network monitoring tools can deal with. AthTek NetWalk works on Windows XP, Windows Vista, Windows 7 and Windows Server 2008. AthTek NetWalk V2.1 includes many features as follow, but not limited to them: * Intelligent navigation; * Minimize to notification area; * Enhanced packet sniffing function; * Add many built-in sniffing model, such as MSN, Yahoo messenger; * Optimize the graphical interface; * Perfectly support IPv6; * Rich info via Matrix Map lines; * Support real-time traffic analyzing; * Upgrade Wireshark functions. With the complete collection of interactive charts, network administrators can fully track traffic data. 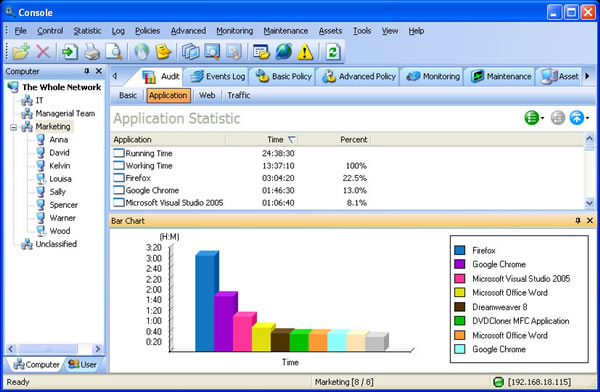 A network packet traffic generator and analyzer with a friendly GUI

Monitor servers, workstations, devices and applications in your network

Encrypts your keystrokes to protect your important personal information

The Network Monitor II (wired and wireless) will show info about your network.

ARKAD is a powerful reporting tool for the Active Directory.