FmPro Migrator is a stand-alone application which migrates FileMaker databases to MySQL, Oracle, Access, SQL Server, Sybase, DB2, OpenBase, PostgreSQL and FrontBase. SQL Server and Access databases can also be converted to FileMaker 7, 8, 9.
FmPro Migrator Developer Edition includes all of the features of FmPro Migrator, but also includes a Table Consolidation feature which performs the automated copying of Tables/Fields, Table Occurrences, Relationships, ScriptMaker scripts and Layouts between FileMaker 8, 8.5 and 9 database files on MacOS X and Windows.

Database data is accurately migrated into the exact format required by the destination database. No manual processing or re-keying of data is required! The FmPro Migrator graphical interface is used to directly get FieldSize info concerning FileMaker fields, create tables in the SQL database and transfer data between database files. All of these tasks are quickly and accurately performed via the FmPro Migrator Migration Process window at the click of a button, instead of the hours or days of work typically required for a DBA to write, test and debug scripts manually.

Additionally, FmPro Migrator includes the ability to document stand-alone FileMaker Pro solutions files running on MacOS X or Windows. Documenting or migrating a stand-alone solution file could be critical to business continuity needs. You could spend $300 - $500 just for a documentation-only tool for FileMaker Pro - but not anymore. 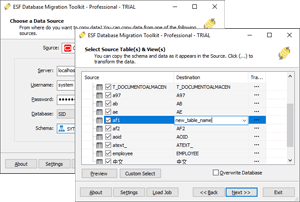 Development and administration of InterBase and Firebird databases

Create an Internet name for your dynamic IP address. Works like a static IP.

A must-have tool for SQLite3 databases administration and data manipulation

Enable users to secure their Internet or network connection

Use your own TeamDrive servers to synchronize your data

Define multiple send profiles and design your own templates