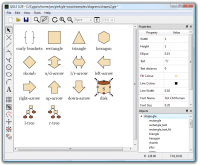 More complex output can be created by relying on GLE's scripting language, which is full featured with subroutines, variables, and logic control. GLE relies on LaTeX for text output and supports mathematical formulea in graphs and figures. GLE's output formats include EPS, PS, PDF, JPEG, and PNG. GLE is licenced under the BSD license. QGLE, the GLE user interface, is licenced under the GPL license.

GLE for Windows - The Latest User Reviews
Write a Review

A programming language that is based on established BASIC rules

Preconfigured BASIC versions (QBasic,QuickBASIC etc). Ready to use with DOSBox!

A language empowering everyone to build reliable and efficient software