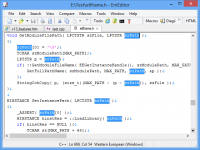 EmEditor Professional, a lightweight text editor for Windows, supports Unicode, as well as many international encodings. EmEditor allows you to open huge files (248GB or larger) quickly and easily, and is optimized for speed and reliability. The Large File Controller maximizes productivity by opening sections of enormous files for faster editing. In a speed comparison test, EmEditor performed better than 10 other text editors in four different categories, including launch time and time to open large files. Features include JavaScript or VBScript macros, plug-ins, syntax highlighting (including embedded scripts in HTML, ASP, and PHP files), drag-and-drop, CSV and TSV mode, Narrowing, Brackets/Quotation Mark Auto-Complete, and much more. The text editor supports not only JavaScript and VBScript for the text editing macros, but also PerlScript, PHPScript, Python, Ruby, and many other ActiveScript languages as long as the script engines you want to use are installed on your system. Binary (ASCII View) and Binary (Hexadecimal View) are included in the available encodings. The text editor can record and play keystrokes and mouse operation against other applications, and includes plug-ins such as Projects and Word Complete, lots of objects for macros, the Macros Toolbar, and portability options (such as USB drive setup), virtual space mode, wrap indent, smooth scroll, and crash auto-recovery. EmEditor v13 includes many new features, such as the new Multiple Selection Editing, which allows users to select and edit text from multiple parts of the document simultaneously. For large file handling, v13 introduces the Split Current Document into Several Files and Combine Documents into a Single File features. The Sort function for large files has also been enhanced, with performance times up to 7 times faster than in previous versions. Other new features include Multiple EmEditor is compatible with Windows 8/7/Vista/XP/Server 2008/Server 2003.

Split one or more YAML files into smaller ones.

Convert one or many HTML tables into JSON files.

Split one or more JSON files into smaller ones.

Find and replace multiple occurrences of text in one or more files.