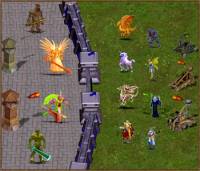 King-war is a free multiplayer online strategy war game that situated in the continent of Carlos, a continent where five races dominate: Human, Undead, Elven, Beast and Monster. As you register you will be a King or Queen,, who controls a kingdom with one castle, coexists with other players in Carlos. You should upgrade technologies, build structures and recruit armies with resources. You also should fight for more territories and resources by hunting, by adventuring, by attacking a castle, town or village. The game is available for web and client that both of the requirements for your computer configuration is low. You can play this game in IE/Firefox/Safari in anywhere at any time. We also provide the client with high quality graphics and sound tracks to play, which supports windows 98/2000/XP/VISTA. Game Features: - Completely free. - Simple and easy to operate. We provide instant help, video tutorials and FAQs. - Multi-races: Human, Undead, Elven, Beast and Monster. - Multi-tasks: Sea war, Hunting, Adventure, Attack castle, town and village At a remote unknown age, there is a continent named Carlos. On the Carlos continent, there live many different tribes, including Human, Undead, Elven, Beast and Monster. Each tribe is fighting with each other for their own private benefits. In order to terminate this fighting situation, a capable and dominant leader is necessary to supervise and maintain the continent.

Pilot a space-ship and rule the stars in this action-packed online game!

Drive a super-high-speed racing car equipped with the most advanced weapons!

Take a role of a commando in the Air Invasion Online game!

The merchant ships started to disappear in the vast expanses of the ocean.