Stereo Tool is a professional low latency audio processor that is used by hundreds of FM, AM and web radio stations all over the world, by musicians who use it to process their recordings, and by hundreds of thousands of people who use the free version¹ to listen to music on their PC.

Stereo Tool makes your music sound more consistent, powerful, clear and detailed than ever before - regardless of whether you play it through low end or high end equipment.

Stereo Tool can make recordings sound equal and consistent in volume and sound color, bring out the details, and increase existing stereo effects. It can repair 'broken' stereo images which often occur on cassette tapes, vinyl and cheap CD's, which normally causes havoc when playing it on a mono system, headphones or a system which includes a stereo widener.

FM hiss removal filter:
· This is useful when the input signal comes from an FM transmitter, for example when re-broadcasting the sound from an FM station.

Stereo booster:
· This filter increases the existing stereo sound, unless it was already very loud, which makes the sound much fuller. It can be configured to not alter the total sound content.

Distortion masking Loudness filter:
· This filter can make sounds up to 12 dB louder, without causing higher amplitude peaks in the signal, with little effect on the sound. Especially useful for radio stations that want to sound loud.

Declipper:
· A unique filter only found in one other processor. It finds and restores clipping (distortion caused by too loud input levels) which is present in most music from the last two decades.

Automatic Gain Control:
· This AGC keeps all the sounds below a defined level. Different from many traditional processors, the AGC in Stereo Tool is not peak level based but acts on how loud something sounds to human hearing.

10-band multiband compressor / limiter / clipper:
· If one song contains a lot of bass, and the next contains a lot of treble, this filter can make them sound equal. Older or bad quality recordings can be made to sound closer to the sound of modern CD's, which generally sounds much better on a wide range of playback equipment.

Final limiter:
· The Stereo Tool Final Limiter can transparantly remove short spikes in the signal - so with nearly no effect on the sound.

Stereo to mono conversion:
· Converts stereo to mono without removing sounds that normally cancel out each other. So the mono sound still sounds just as full and powerful as the original stereo sound. 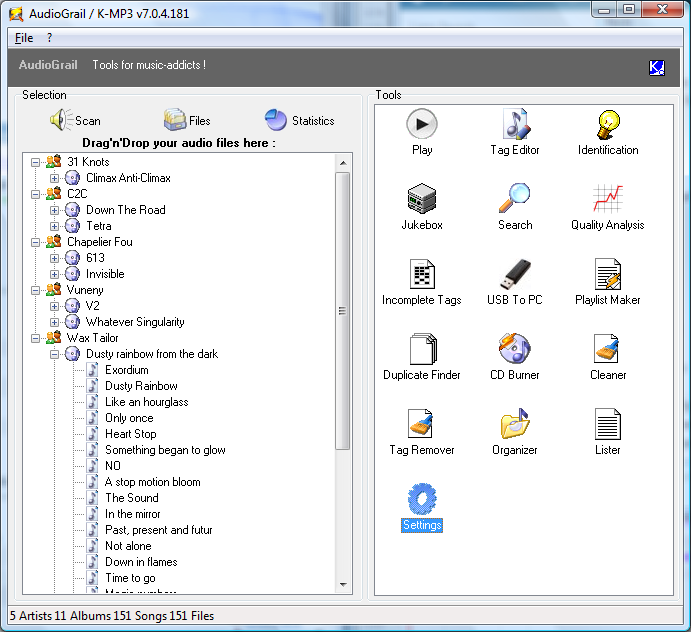 An automatic MP3 renamer and tagger

A software MIDI synthesizer for professional use

Create a reverb which would sound pleasant to the listener